Mauricio Pochettino recently claimed that the club are about to move into one of the world’s best stadiums. Tottenham are constructing a brand-new 61,000 seater stadium, near the existing White Hart Lane, at a whopping cost of £750 million. Apart from being one of the most expensive stadiums in the world, the unnamed stadium is said to be a centrepiece of attraction in the Premier League if several rumours turn out to be true.

One of the latest rumours is that the stadium will contain a tunnel club, which will give fans unprecedented access to behind the scenes stuff, exclusive access to a restaurant and glass-walled bar and recario-style seats rather than the traditional fare. The latter is usually found in the dugouts of some clubs and those who sign up for the tunnel club membership will also be able to see players coming through the tunnel prior to a game. Even though the stadium will cost a substantial amount of money, Spurs are looking to make much of those figures back through sponsorship.

Modelled on the Emirates stadium, Spurs are likely to give naming rights to the sponsors for a period of around 15 years. This would contribute a major chunk of the construction costs, while Spurs will be able to enjoy much higher revenues thanks to almost double the stadium capacity of the existing White Hart Lane. Furthermore, the hospitality packages always have been a key part in the club’s revenue stream and this could be improved to a new level.

A statement read: “Be a Premier League star without pulling on a pair of boots with our Tunnel Club membership.

“The main feature of this facility is the glass-walled restaurant and bar area giving you a unique behind the scenes view of the Players’ Tunnel.

“The first of its kind anywhere in UK football.

“You’ll enjoy pitch-side seats located behind the home team’s dugout in the comfort of players specification ‘Recaro-style’ seats – nobody in world football gets closer.

“Tunnel Club is authentically designed in the heart of the stadium.”

In order to facilitate the construction process, Tottenham are expected to play at the Wembley stadium next season. At present, the club are playing their group matches at this stadium and even the league matches will become part of the schedule from next campaign onwards. The club, though, are hugely confident that the new stadium will be ready to host matches from the 2018-19 season. When ready, the new stadium will bring Tottenham level with Arsenal and West Ham in terms of stadium capacity while being slightly smaller than Manchester United. 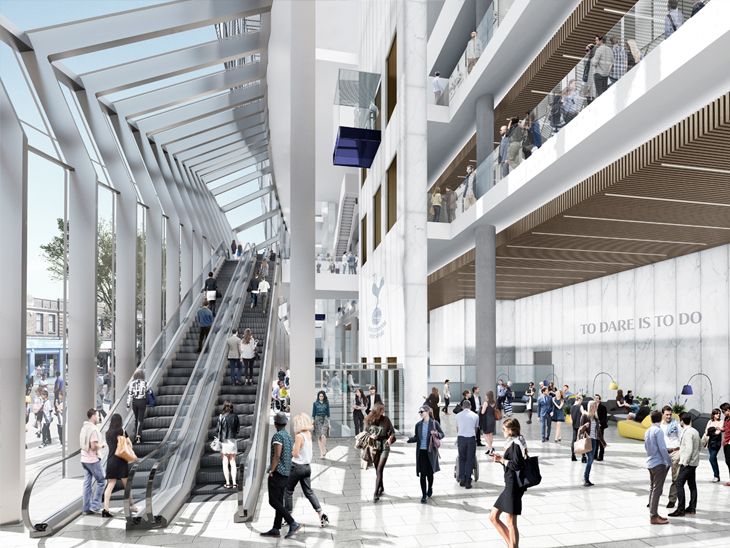 Liverpool recently extended their stadium capacity to just under 55,000. Even though the submitted plans to extend the capacity to 60,000, it looks highly unlikely that the final 5000 may be added due to financial constraints.

Spurs were also keen on naming the train station as the Tottenham Hotspurs station. However, London’s Tube network have demanded £12 million from the club in order to compensate for the vast changes required in the mapping system.

The increased revenue from the stadium will be a huge factor in Spurs moving to the next level and becoming a Champions League team on a regular basis.