Can Spurs capitalise on their rivals' slip-up? Predicted 4-2-3-1 Tottenham XI to face Everton Tottenham will face a tough test of their Premier League title credentials as the Lilywhites face Everton at Goodison Park.

The Toffees will certainly want to do one over on us but we come into the game with a lot of confidence following our 2-0 win over Arsenal in the Carabao Cup.

Hugo Lloris and Harry Kane were rested in that win, and the pair should start for us on Sunday. Mauricio Pochettino could change a few things in our starting XI.

Tottenham have to keep their players fresh for the gruelling Christmas schedule. Here is my predicted line-up for Spurs.

The French keeper was rested against the Gunners and should return to the side to face Everton.

The youngster could get the start in place of Kieran Trippier and needs to be wary of the threat possessed by the home side.

The Argentine should be fit to face the Toffees and continue his great form for Tottenham.

The Belgian can’t be rested with Jan Vertonghen out. Hopefully, once Davinson Sanchez is ready to start, we can give Toby a well-deserved break.

Davies should slot into the left-back role now with Foyth starting in the heart of the defence.

The French midfielder cannot be dropped from the side and has to continue in the starting XI with the likes of Mousa Dembele and Eric Dier injured. Harry Winks did a pretty good job in the win over the Gunners but Tottenham should replace the Englishman with Skipp.

Eriksen has been decent in the recent weeks for Tottenham and the Dane should keep his place in the side.

Alli scored a goal against Arsenal that should help his confidence. He generally does well against Everton. The Argentine came on in the second half against the Gunners and should start for us against Everton.

Read more: “It can toughen you up mentally and physically” – Tottenham star reveals how Pochettino pushed him to play through the injury issue

Kane was the other star rested in midweek, and hopefully, he bags a goal or two against the Toffees. 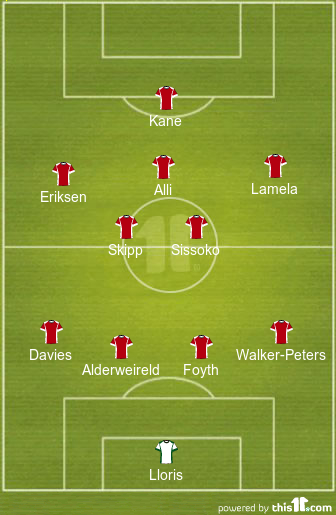