Moura and Lamela to start? Predicted 4-2-3-1 Tottenham line-up to face Crystal Palace in the FA Cup Tottenham would be aiming to bounce back from their Carabao Cup exit when they face a potentially tough game against Crystal Palace at Selhurst Park in the FA Cup.

Palace are generally not easy opponents, especially at their home ground. But we did beat them 1-0 at Selhurst Park earlier in the season.

Spurs have a few injury concerns with Moussa Sissoko and Ben Davies picking up minor knocks in the loss against the Blues. This should force Mauricio Pochettino to make some changes to the starting XI.

Harry Kane and Dele Alli are long-term absentees while Son Heung-min’s journey in the Asian Cup came to an end. However, it is unlikely he will play on Sunday.

The FA Cup is realistically our best chance of winning some silverware this season. Below we predict the line-up that could start on Sunday and keep our silverware hopes alive.

Gazzaniga has played the domestic cup games this season and is expected to do so on Sunday as well.

Serge Aurier played in the loss against Chelsea, but Pochettino should swap the right-back with Trippier coming in.

Toby played in the previous game and we shouldn’t change much at the back.

Vertonghen is another player that should keep his place in the team after the Chelsea defeat.

The Englishman had to be brought on to replace Davies and should start for Tottenham on Sunday.

Winks has been exceptional for Tottenham in recent weeks and should start in defensive midfield on Sunday.

It is great that we have Dier back and hopefully, the midfielder does well against a tough Palace side.

The Dane needs to have a great game for us on Sunday, and his creativity could be crucial in us winning the tie. The Brazilian needs to have a quality outing against Palace, and hopefully, he scores a goal or two.

Lamela hasn’t had a great second half of the campaign for Spurs. The Argentine started the season well, but things just don’t seem right for him. He needs to have a good game tomorrow.

The Spaniard didn’t do all that poorly against Chelsea and scored a goal to shoot up his confidence. He is not Kane, but he is effective in the box if the crosses come in. 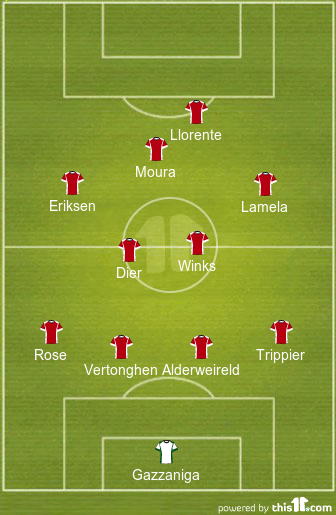