Iago Falque – From Tottenham flop to Serie A star

It was in August 2011 that Tottenham Hotspur signed Iago Falque from Juventus, initially on loan, before making the transfer permanent six months later.

Falque’s youth career had been a decorated one. The Spaniard had started out at the Real Madrid academy, before making the switch to Barcelona’s La Masia in 2001. The winger progressed rapidly through the youth ranks at Barcelona and become a B team regular when Juventus signed him in 2008.

Linking up with Juve’s U19 side, Falque enjoyed a spectacular campaign, scoring 13 goals in 20 matches. He even made it to the bench in the first-team, but did not make his debut. The following season, the Spaniard was loaned out to Bari, in order to aid his development. However, he failed to make a single first-team appearance and returned to Juve in January, after 11 appearances with the U19 team, in which he scored four goals. He added three more goals to his tally with the Juve U19 team after returning.

The 2010/11 season saw Falque return to Spain, joining Villarreal B on a season-long loan. Another goal-laden campaign followed, as he netted 11 times in 36 La Liga2 matches for the B team before returning to Juventus.

Falque was yet to make his first-team debut at Juventus. But Tottenham decided to take a punt on the youngster and the potential he had shown. And so, the Spanish winger arrived at the White Hart Lane on loan, to further his career under Harry Redknapp.

Falque made his first-team debut for us in a Europa League clash against PAOK in September. The Spaniard made just five more appearances post that – none in the Premier League. But Tottenham signed him permanently in January. Immediately after, he was loaned out Southampton, who were in the Championship at the time. 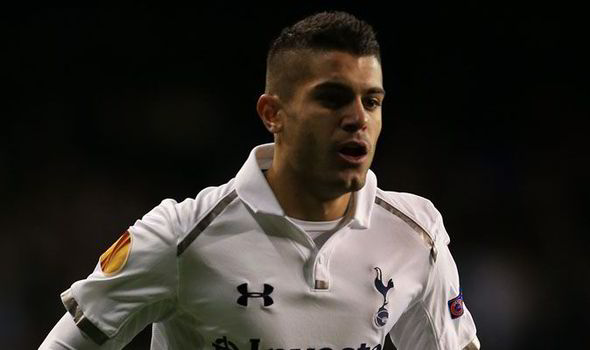 Falque could never establish himself at Tottenham

Falque made his debut for the Saints a week after joining. But that was the only time he took the field till the end of the season, before returning to Tottenham. At the time, Redknapp was no more our manager, with Andre Villas Boas taking over the reins. The following season, Falque made a solid impression for our reserves, scoring and assisting 5 goals apiece in 7 matches.

This led to his Premier League debut in December 2012 – a five minute cameo. But with first-team opportunities not forthcoming, he was once again loaned out in January, this time to UD Almeria. He was a regular for the Spanish team, as he helped them to promotion to La Liga, scoring 2 goals and setting up 5 more in 18 games.

Despite impressing for our reserves early in 2013/14, with three goals and an assist in two games, Falque was deemed surplus to requirements by new boss Tim Sherwood. He was subsequently loaned to Rayo Vallecano, where he managed 3 goals and assists each in 28 La Liga games. The following summer, Falque left Tottenham permanently to sign for Genoa and has not looked back. And soon enough, the Spanish winger began to show why Redknapp had invested in his potential. In his debut season for Genoa, Falque produced a return of 13 goals and 5 assists in 35 Serie A matches, helping them to a sixth-place finish.

Impressed by his performances, Roma signed the Spaniard, on loan, with a clause to make the transfer permanent. But his performances failed to hit the same heights as last season, as he managed just 3 goals and 2 assists in 27 matches.

Come next summer, Falque was on the move again, leaving Roma for Torino, on a similar loan-to-buy deal. And he enjoyed a fine season with the Turin outfit, scoring 12 goals and set up 6 more. The Spaniard formed a deadly partnership with Andrea Belotti. He ended the season as the club’s second-highest goalscorer, helping them finish 9th in Serie A.

He stayed at Torino the next season – the first time in his senior career that he had played consecutive seasons for the same club. His partnership with Belotti continued to flourish, as he enjoyed the best season of his career. Falque ended 2017/18 with 14 goals and 9 assists, finishing as Torino’s top scorer. There was a slight dip in form in 2018/19 due to injury issues, as he managed six goals and six assists in 28 matches. Things got worse for the 30-year-old this season, as he missed majority of the first half due to ankle and hamstring issues.

After making just five appearances, Falque left Torino to join Genoa on loan. The 30-year-old managed just one appearance before football was suspended in Italy due to coronavirus.

Falque’s time at Tottenham ended with just 11 senior appearances, during which he managed no goals or assists. However, the Spaniard has thrived since returning to Italy, going on to show that he had the potential to come good for us. Since leaving Spurs permanently in 2014, Falque has scored 48 goals in 163 appearances.

Perhaps the managerial instability at the time at Tottenham didn’t help the winger’s cause. We saw Redknapp being replaced by Villas Boas, who was soon shown the doors and Tim Sherwood took over. And in 2014, Mauricio Pochettino arrived.

On the contrary, it may also be said that Falque could never get to grips with English football, although he did impress at every opportunity he got with the reserves. Nevertheless, he may have been a flop at Tottenham, but he went on to become a top performer in Serie A.