According to journalist Fabrizio Romano, Chelsea are ahead of Tottenham in the race to sign Jules Kounde. The tweet adds that Chelsea are in advanced talks with Sevilla and that the player is the main target for the club.

The Blues are pushing for a possible player plus cash deal involving Kurt Zouma and Kounde is believed to have agreed on personal terms with the club. (h/t Fabrizio Romano)

The centre-back has caught the eye of the two London clubs this summer after impressing at Sevilla. The player is just 1.78m tall, something which can be a hindrance for a centre-back. However, Tuchel’s back 3 could protect that. The below analysis shows Kounde’s impressive ball progression and promising aerial abilities. 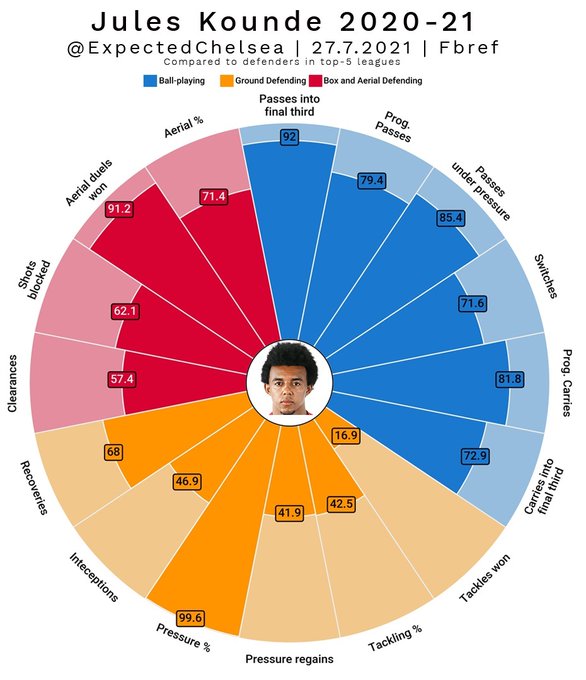 A move to Manchester United was speculated by The Mail. Suggesting that the club are moving closer in their pursuit of the player. However, the report added the likes of Real Madrid, Tottenham Hotspur and Chelsea as other buyers.

Fabio Paratici and Nuno Espirito Santo are on a mission to revamp the Tottenham defence.

Journalist Fabrizio Romano revealed that the club considers Cristian Romero as the number one target. However, Tottenham do have a ‘Plan B’ in place. The club will open talks with three different defenders with the same amount. Tomiyasu for €18m, Milenkovic for €15m and Zouma for €25m are mentioned as backup options for Spurs as per Romano. Kounde would be a brilliant signing for Tottenham. (imago Images)

The club has already started with moving defenders out. Veteran Toby Alderweireld has left Tottenham Hotspur to join Al-Duhail. Meanwhile, Sevilla have shown interest in a Spurs defender themselves in Davinson Sanchez, as per football.london (h/t Express).