Fernando Llorente to receive a start? - Predicted 4-2-3-1 Tottenham XI to face Manchester City in the PL Tottenham will now be aiming to ruin Manchester City’s title ambitions after dumping them out of the Champions League quarter-finals on Wednesday.

We are set to visit Etihad Stadium on Saturday, following our passage to the Champions League last four on away goal despite losing the second leg 4-3 to City.

Spurs produced a fantastic performance on Wednesday and our gaffer Mauricio Pochettino will expect something similar from the boys at the weekend as well.

Moussa Sissoko limped off in the first half at Manchester City and remains a big doubt on Saturday.

Eric Dier, Serge Aurier and Harry Kane are all sidelined, while Erik Lamela and Harry Winks are touch and go for the upcoming fixture.

Lloris will need to be at the top of his game to help Spurs beat City on Saturday. Trippier was the weak link in the Champions League game on Wednesday. He’ll have to improve this time around and produce a solid display.

Vertonghen is a reliable defender who will have to be at his best to keep the City attackers at bay.

Rose is expected to keep his place in the team after a strong display on Wednesday. Wanyama had an excellent Champions League outing at the Etihad. With Sissoko highly unlikely to recover, his presence in midfield will be important at the weekend.

Eriksen will need to step up and produce a top performance if we are to beat City at the Etihad.

Alli is a clever operator who links up play between the midfield and the attack. The England international will retain his place in the team.

His two goals at the Etihad proved so crucial for us on Wednesday. The South Korean is an undoubted starter on Saturday. Moura’s pace, agility and direct play will be an all-time threat for the City defenders. With Kane injured, the Brazilian is expected to start.

It was Llorente’s goal that has sent us through to the Champions League semi-finals. The big Spaniard could find himself in the starting XI at the weekend. 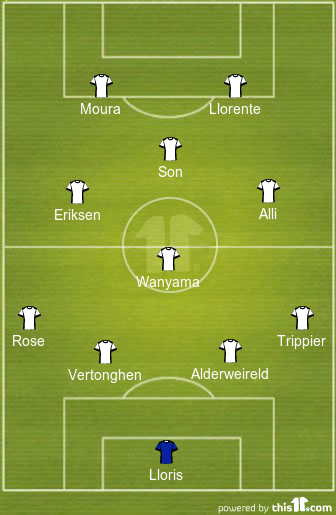