Tottenham will be looking to return to winning ways when they host relegation-threatened Brighton on Tuesday evening.

Spurs were unable to build on their incredible Champions League triumph over Manchester City at the weekend, slipping to a narrow 1-0 defeat at the hands of the Pep Guardiola’s men despite a spirited performance.

Our boys return to the new stadium on Tuesday, though, where we have won all three games so far without conceding a single goal.

Let’s hope we bounce back to winning ways against Brighton to boost our top-four hopes this season.

Harry Kane remains out sidelined but Hugo Lloris could return back after missing the 1-0 defeat to City last weekend.

Meanwhile, Erik Lamela, Moussa Sissoko and Serge Aurier are all injured. Harry Winks will have a late fitness test ahead of the game.

Lloris muscular problem is not a serious one and he should return back in goal after missing the last league game. Trippier has been sub-par since the start of the season but with Aurier out injured, expect the Englishman to return back to the team after missing the last game.

A rock at the back, Alderweireld will be eager to help our team keep a clean sheet against Brighton.

Partnering Alderweireld in central defence could be Davinson Sanchez as our gaffer will likely give Vertonghen rest ahead of some really juicy games.

Davies offers defensive stability to the team and is likely to get the nod ahead of Rose at left-back. Wanyama has been impressive since returning from injury in the last couple of weeks. He deserves to start on Tuesday.

With Sissoko out with a groin problem, Dier could be the man to replace the Frenchman in midfield.

Alli’s versatility to play in different positions in midfield and attack make him an asset to our club. He’ll start on the left flank against Brighton.

Tottenham’s best player when in form, Eriksen is an undoubted starter for Tuesday’s game. Son has enjoyed an exceptional season for Spurs and is one of the first names on Pochettino’s team sheet.

Pochettino could go for some physicality and power up front instead of pace, meaning Llorente should get the nod ahead of Moura. 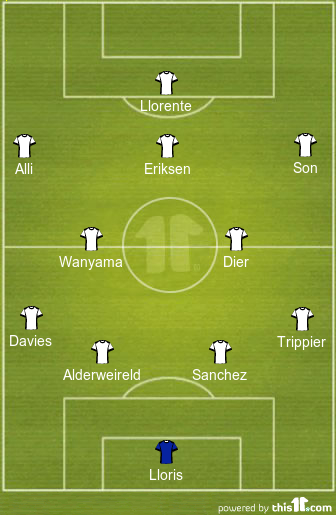