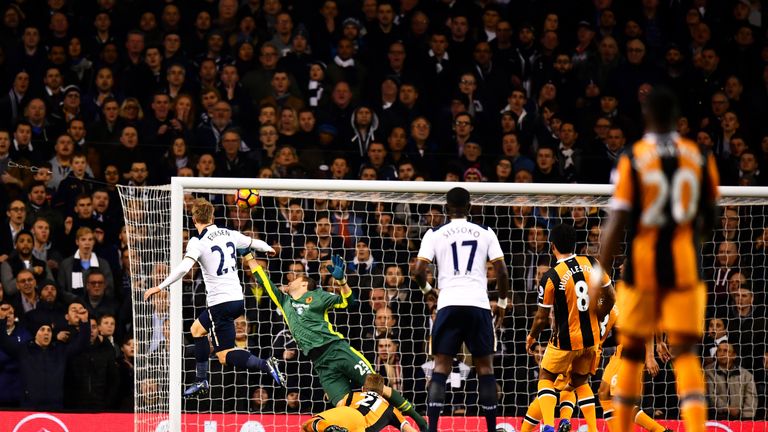 Tottenham ensured they finished match day 16 in fifth place with a convincing 3-0 victory over struggling Hull City. Mauricio Pochettino’s men dominated the game right from the go and the margin of victory could have been greater.

Hull, for their part, had chances to level the score when it was 1-0 in favour of the home side but will rue not taking them up. The Danish international Christian Eriksen got the ball rolling in the 14th minute before he scored again in the 63rd.Victor Wanyama also got in the act and scored the third goal but Eriksen would feel a little aggrieved as it was his free-kick which the Kenyan slotted in after a save from the Hull goalkeeper.

Picking up three points was crucial for Tottenham as Manchester United had closed the gap to Spurs after their win over the Lilywhites. And the performance would have pleased the Argentine manager as Spurs look to face Burnley at White Hart Lane on Sunday.

There were 30 passes leading to Eriksen’s goal for Tottenham, the most leading to a #PremierLeague goal this seasonhttps://t.co/Bw6iWUL5Ne pic.twitter.com/LJ0QLyX0Fz

A clean sheet for Hugo on his 150th @PremierLeague appearance tonight!

Take a look back at 5️⃣ of his best saves in a Spurs shirt… pic.twitter.com/5eFGW6WUsG

FT: Tottenham 0-0 Hull. 2 tap ins from Eriksen and a tap in from Wanyama are ruled out as tap ins do not count as goals. Very unfortunate.

Spurs fans break into a chorus of ‘One Michael Dawson’, ‘Tommy Tommy Huddlestone’ and ‘Ryan Mason, he’s one of our own’

Christian Eriksen has scored 4 goals in his last 4 Premier League games for Tottenham.

“The staff have been giving me stick!” @VictorWanyama explains his celebration and going to the bench to tell the coaching staff off! pic.twitter.com/Za4FCsbJrJ

Jan Vertonghen completed 100% of the three take-ons attempted vs. Hull City, more than any other Spurs player.

Prefer if we sung some Kyle Walker songs. The guy is having another immense evening. Not many performances under an 8/10 this season #coys