Federico Fazio – From Tottenham flop to Serie A star

It was in August 2014 that Tottenham Hotspur spent £8m on Argentine defender Federico Fazio, as Mauricio Pochettino sought to bolster his defensive ranks.

Fazio, having started out at Argentine outfit Ferro, made the jump to La Liga side Sevilla in January 2007. Aged 20, the defender made his La Liga debut in August the same year and became an integral player of the team in his maiden campaign in Spain, due to the injury-enforced absence of Javi Navarro and Julien Escude.

The youngster, alternating between the centre-back and the defensive midfield role, made 22 La Liga appearances. However, the next three seasons would prove quite difficult for Fazio as injury issues plagued the Argentine. He made less than twenty league appearances in each of the seasons.

Fazio, though, was back at his best from the next term. The 2013/14 campaign was his most successful one at Sevilla, as he was an ever-present in the side that would go on to lift the UEFA Europa League, while finishing fifth in La Liga.

It was this campaign, during which he made 41 appearances and scored three goals, that convinced Tottenham to sign him up later in the summer that year. 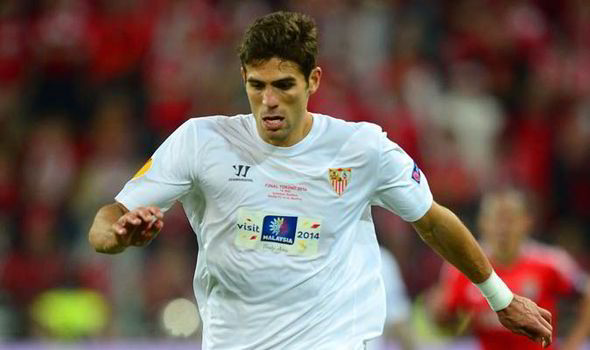 Federico Fazio won the Europa League in 2013/14 with Sevilla

Standing at 6’5″, the Argentine was expected to add an imposing presence to the Tottenham backline, while providing them with an upper-hand in aerial duels at both ends of the pitch. Having allowed Michael Dawson to leave, Fazio was expected to fill in the void left by the veteran campaigner.

But things did not go according to plans for the player or manager Mauricio Pochettino. Making his Premier League debut against Manchester City in October, Fazio was shown a red card for denying Sergio Aguero a goalscoring opportunity. With ten men, Spurs ended up losing 1-4.

Another similar incident would take place a month later, in the Europa League against Greek outfit Asteras Tripoli. Although, the sending off came in the 89th minute, and Tottenham managed to hold on for a 2-1 win.

Fazio never really got going from then on at Tottenham and finished the campaign with 32 matches in all competitions, playing no part in the semi-finals and the finals of our EFL Cup run, which ended in a disappointment. In the subsequent season, Fazio did not play a single league game under Poch and made just the one appearance in a 2-1 EFL Cup defeat to our bitter rivals Arsenal in November. Having been phased out of the team, the Argentine would soon depart to return to Sevilla till the end of the season, but the Argentine struggled to make an impact upon returning to his old stomping grounds.

Having left unconvinced after his loan at Sevilla, Tottenham again shipped him off on loan, this time to AS Roma, where his fortunes began to turn. Fazio featured in all but one Serie A games for the Giallorossi, as they finished second in the league. Fazio’s presence in the back was critical to the Roma side as they finished with the second-best defensive record in Italy that season.

Fazio ended his season on loan at Roma with 48 appearances, scoring 4 goals and setting up one more, prompting the Serie A side to make the transfer permanent in the summer.

The 2017-18 saw Fazio continue from where he had left off the previous campaign. The Argentine centre-back featured in 34 of Roma’s 38 Serie A matches, helping the team to a third-place finish as they once again finished with the second-best defensive record in the competition, letting in just 28 goals. But his best performance of the season would come in the Champions League against La Liga heavyweights Barcelona. After having let in four goals in the first leg of the quarter-final, Fazio and Roma went to Camp Nou for the second leg with an improbable task of beating the Catalans.

And they did just that, as Fazio, with the help of Kostas Manolas and Juan Jesus shut out an attack comprising of Lionel Messi, Luis Suarez and Andres Iniesta, helping Roma to a 3-0 win and progression to the semi-final, where they would falter against Liverpool.

Fazio was once again an ever-present for Roma last season, managing 42 appearances. But the ongoing campaign has seen the Argentine drop down the pecking order, with age seemingly catching up with him and injury troubles not aiding his cause, although he has captained the team on a few occasions he has played.

Fazio’s time at our club was largely forgettable. Yet, after leaving London, the Argentine thrived in Roma and went on to perform at the top level for a couple of years. Perhaps, had the club shown a little more patience with him, we could have seen his best at Tottenham.

However, a case could also be made that the 33-year-old would always have been suspect to the pace of the Premier League and found it a touch more comfortable to deal with football in Italy. Nevertheless, he may have failed at Spurs, but he went on and grew into a key player at the Italian capital club for three seasons.